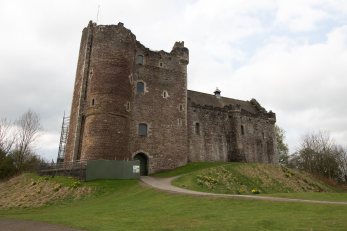 The next full day in Scotland I woke up feeling better – which was an extreme good thing because we were scheduled for a 12-HOUR tour into the Highlands and to see the Loch Less. This tour was freaking unbelievable! Our guide, Stefan, was grand. He had so much personality and seemed to really love his job. He told a plethora of corny jokes, in a lovable way, while giving interesting information. He also arranged a few extra side-stops that were well worth putting us a bit behind schedule. One of those side stops was to see the castle that was used in the first season of Game of Thrones! This castle was also featured in Outlander and Monty Python. 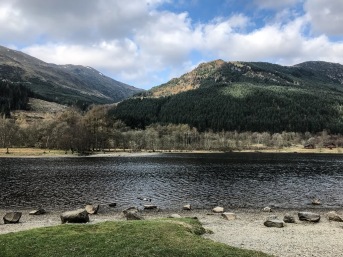 My overall take-away is that the Highlands are glorious, wild, majestic, and breathtaking. I fell in love and it seemed Andy did as well. Andy raced ahead of the group at one point to climb one of the smaller mountains for a photograph – against our guide’s advisement. Watching Andy, in all his enthusiasm, so enjoy this trip was a treasure that I’ll carry with me for the rest of my life – no exaggeration. 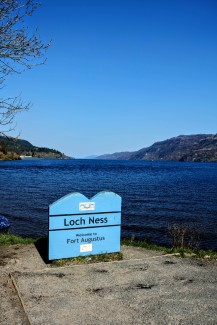 Seeing Loch Ness has been another bucket list item for me (I even had a stuffed dinosaur I named Nessie after the Loch Ness monster when I was a child). My dad is a fan as well. He and I watched documentaries together when I was younger and have discussed theories together, so I was SUPER pumped to hit this destination. Once we got there, I bounded out of the van, ready to be wowed. And I was disappointed.

It wasn’t the eerie, mysterious lake of my dreams. Instead, it was just another lake. In fact, it was quiet, clear, and pretty lake – with a ton of commercialization surrounding its banks. There were Loch Ness signs, Loch Ness monster posters, gift shops, restaurants… it was just too much. I was over it. Andy and I went into one of the restaurants that overlooked the water and had a decent lunch while we waited for the bus to get ready for take-off.

Since our plane to Ireland was scheduled to leave early the following morning, we went straight to the apartment after our tour to get some rest – both agreeing that we wish we allowed more time in Scotland. We are already planning to eventually make a trip back to tour the magnificent Highlands more thoroughly.